Upon invitation this work is a response to the visionary work ‚The intelligent Market‘ from 1987 by Sowjet architects Utkin and Brodsky (known as paper architects) from the Alvin Boyarsky collection titled drawing ambience of the AA in London. Following their refusal to allow for an architecture and world that is dominated by the age of information, this work is a comment, exactly 40 years later, and reflection on hermetic systems, cloud computing and products related to it. More precisely it sheds a light on Apple‘s attempt to hide its data center in Nevada, in the year 2008, from any satellite images provided by google. Instead satellite images depicted a greenfarm. The work takes its aesthetic references from the notion of erasure with correction fluid, and digital deletion of its surrounding.

The work departs from the notion of today‘s cloud computing and its repercussions on our society but further hints towards the resolution that citizens have in knowledge versus the resolution that any government holds both literally and in image technologies. Speaking of governments, the rising power and importance of corporations are highlighted, one most only consider the famous photograph of Mark Zuckerberg shaking hands with President Elect Obama. One could argue that the hermetic Sowjet regime that Brodsky and Utkin have attempted to revolt against nowadays are corporations alike apple with their closed user systems (i.e.itunes) with which they chain their users, but also their material manifestations. 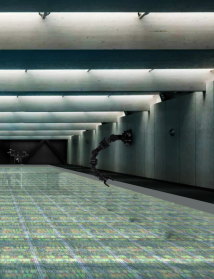